This pond with a surface of 20 ha (22 ha at the land registry with the ditches, belt dykes and shores) has been recreated, upon prefect authorisation, after more than a century under culture. It is the third pond of the chain made up by the Riquet and Boufflers ponds (each pond being shored up by the dyke of the precedent).

Our stated will to increase the wet areas zones of the Foundation Pierre Vérots led to the recreation of this pond left dry around the year 1900.

Impounded during the 19th century, left dry at the beginning of the 20th century, it was recreated in 1999 following due administrative procedure and public utility hearings. It is a shallow pond, relatively flat comprising a few islets and quasi-islets or “molards” (linked to the shore by a shoal). Its watershed, together with those of Boufflers and Riquet upstream is 175 ha (45 + 62 + 68 ha). It is fed by drainage of part of the communal woods of Monthieux and Saint-Jean-de-Thurigneux.

The clay necessary for the constitution of 2.2 km of dykes was obtained from the sediments dug up when flumes, ditches and dykes were realised.

Around 1 000 m of belting dykes were created (1 m deep) and 1 600 m preexisting dykes were cured or deepened (with installation of narrow passages to permit watering of neighbouring lots). 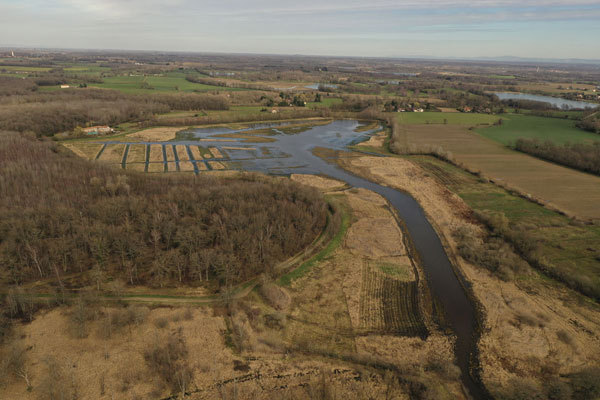 Various masonry works were also created and equipped with 6 grills. 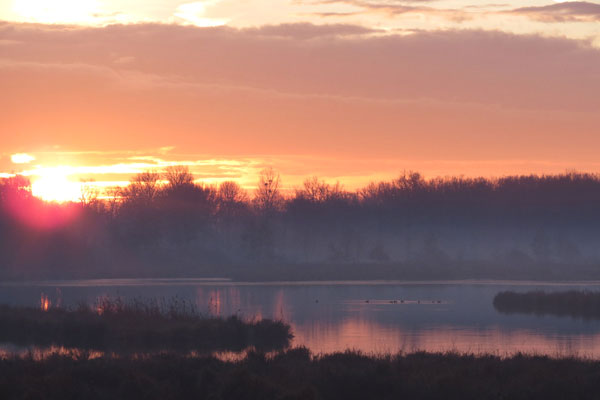 The shores on each side of the discharge valve were stabilised with pebbles to avoid the filling up of the catchment area and obstruction of the discharge system. Finally, the path leading to the dyke was equipped with a covered geotextile to permit access of vehicles (various maintenance activities or linked to pisciculture) and a concrete staircase was also installed on the dyke to facilitate fisheries.

Works aiming to favour water birds and their nesting but also aiming to favour fish (spawning ground…), were realised in the 2005/2006 winter, taking into account the experience acquired since its creation. The rush bed was fragmented in the western part by the creation of troughs (to increase the contact zones between water and plants), shallow zones were realised close to the centre of the pond and a sector of mudflats was increased to the east.

The Praillebard pond was recreated to become a traditional fish-producing pond with dry culture every 3 – 5 years. This management choice follows prescriptions of the dombist tradition and thus provides the opportunity to compare the results obtained, from the point of view of biodiversity, with those of the Boufflers pond, maintained under permanent water impoundment.