Pierre Vérots during and after the war

During the 1914-18 war, Pierre VEROTS, not yet 20 years old was fond of mechanics, was hired as mechanic in  military aviation.

After the war and having achieved his studies, he did set up an high-precision mechanics enterprise. He installe dit in Villeurbanne, on the 4 août street.

He worked essentially for National Defense. His enterprise became rapidly very prosperous. He had bought the most modern machines he could find in the USA. At the time, in the 30s, there were no transatlantic airlines. He got on the Normandie boat that was then the fastest means of crossing the Atlantic Ocean, transferring the management of the workshops to his main collaborators.

He was a rigorous and demanding boss but he knew how to acquire and maintain the confidence of his personnel through his understanding and generous direction. His staff were fond of him.

Pierre Vérots during the german ocupation…

During the Occupation, he refused to work for the Germans and converted immediately his workshops toward civilian fabrications. This permitted to maintain conserver jobs for the whole staff.

It was then that he decided to make an auxiliary gasoline engine that could be fitted on any bicycle, since cars were relegated to garages, due to the scarcity of fuel. He did this in partnership with Pierre ANDRIOT (1885-1945), the husband of his first cousin Elise VEROTS. Pierre ANDRIOT was himself an engineer specialised in carburetors for aviation automobiles.
Carburation was at the time one of the major problems of thermal engines, especially for such small engines that had not been made yet : 0.5 CV that was designed to burn as little gasoline as possible, a gasoline that was also of poor quality, containing various proportions of alcohol.

Thus was conceived the VAP engine, an acronym based on Vérots-Andriot-Pierre, Pierre being their common first name. A few years later appeared, after the war, Vélosolex, who based their bike on a similar idea but avoided breaching the patent law.
Let us recall that the VAP engine was set on the rear wheel geared on a toothed wheel fixed on the rays of the bike wheel. Vélosolex had to content itself with the front wheel, at the top of that wheel which heightened the gravity center thus decreasing the stability of the bike. Moreover the Vélosolex engine transmitted power to the front wheel through friction on the tyre, which caused premature wear, and rejected the exhaust fumes in the face of the driver instead of rejecting them behind him. 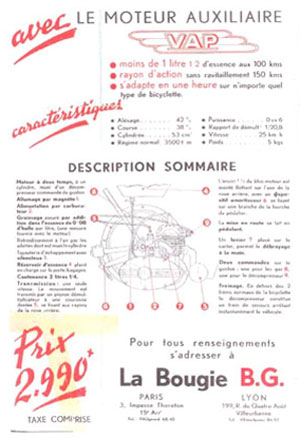 After the end of the war, Pierre VEROTS invested in the fabrication of compressors units for refrigerators and sold the conception and the VAP brand to another industrialist. After the war, the public demanded electrodomestic appliances, first of all “frigidaires”, a fashion coming from the USA. To have reliable compressors, without leaks, a high precision  but cheap mechanical production was required. Pierre VEROTS knew how to do it.

Always on the look for innovations, he started the construction of machines permetting the creation of plastics objects through extrusion or compression, techniques that were then very new.
He then had two factories, one on the 4 août street and a new one, situated Paul Verlaine street, also in Villeurbanne.
Getting older, in the 60s, he took his retirement and sold his enterprise. He had no heir possible in his family.

Portrait of Pierre Vérots and his spouse

Pierre VEROTS was a calm, thoughtful man, with an eye for details. One of his qualities was certainly to be able to discern through a few indices undiscerned by others what could tomorrows’ innovations. Even at 80, he kept up with the latest developments.

He was certainely a hard bargainer but perfectly honest. His success was based on the technical choices he had made.

His fortune was acquired early on since, before the war, he had moved to a large apartment situated quai général Sarrail in Lyon, looking over the Fourvière hill, had acquired a large estate in Trévoux and a villa n Mont Borron, in Nice, where he also had a magnificent mahogany sail boat, maintained year-long by a sailor on the old port. He even ended up having a new more competitive boat constructed for him. 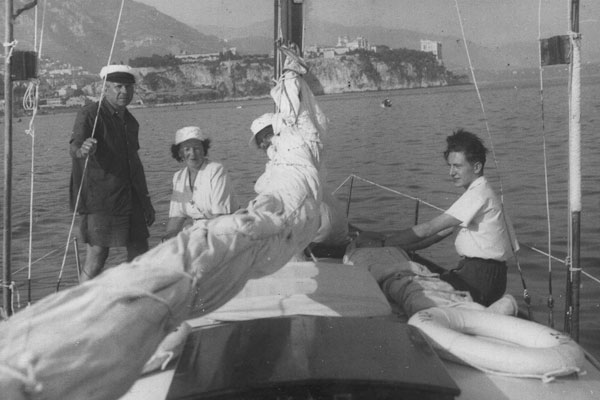 Pierre and Gabrièle Vérots on their sailboat in 1950 with Jean Andriot.

Pierre VEROTS moved later  to a villa situated on the  Moyenne Corniche, in Villefranche sur Mer. He liked the view over the bay of Villefranche where one could even discern Corsica when the air was clear.

Later on, the VEROTS moved to an appartment situated in the center of Nice. Then they also stop living on the Quai Sarrail in Lyon, which they nevertheless kept. They bought an appartment in a then residence of a new type for the time : Les Euménides where logistical and medical support was available day and night. 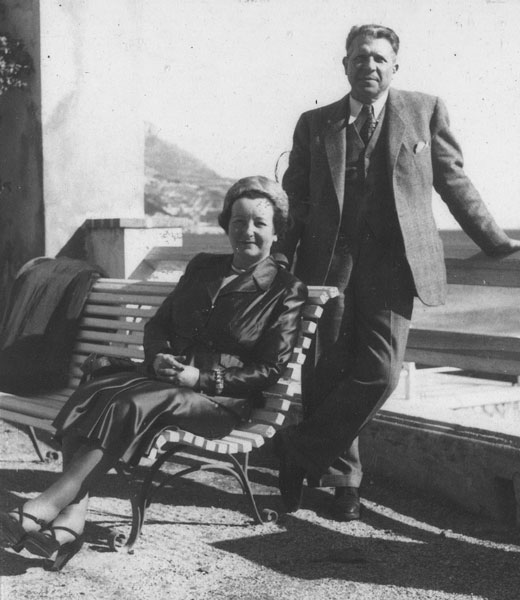 His wife, Gaby, was also active and a headstrong woman. She seconded him efficiently, but she underlined her husband success was his only.
They were a sport-minded couple, before the war, since they went regularly ski in the Alps, at a time when ski  was not very popular. They also toured exotic places in Africa or Asia.

Pierre VEROTS was also a hunter  and that was the reason he bought Praillebard immediately after the war. This enabled him to entertain his business relations by organising hunting parties.
But as he got older, and mostly after retiring, he started interesting himself more to the observation of  nature and its immense variety, perceiving early the need to protect it.
The VEROTS led, during their whole lives, a very simple and discrete life, with no lavish receptions and no ostentatious way of life. Unfortunately, they did not have children. Pierre VEROTS involved himself in the professional formation of young people. For that reason, he received academic palms. He also cared about the retirees of his factories by donating  the 4 août street factory  to the municipality of Villeurbanne to be transformed into a reception center for old people.